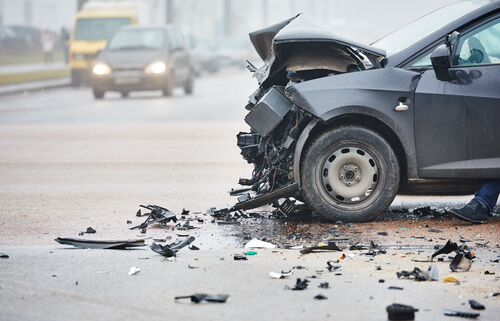 It goes without saying that car accidents can be shocking. What you may not know is that your claims process can be equally as shocking if you aren?t prepared. If you?re in a car accident in Georgia, it?s important to put yourself on a path to physical and financial recovery as soon as possible. Here are six things you should remember in an accident.

1) CHECK YOURSELF, YOUR PASSENGERS, AND YOUR SURROUNDINGS

Know whether you or anyone in the vehicle needs immediate medical attention. Call 911 immediately if an ambulance is necessary. Check your surroundings for mile markers, speed limit or street signs, stop lights, exit ramps, etc. When calling 911 for emergency assistance, having this information will get the responders to your location quickly.

Many people suffer through heavy traffic conditions in Atlanta, and, unfortunately, some of those conditions are caused by accidents that result in lane closures. Wrecked vehicles can sometimes be damaged to the extent that they are no longer functional or are dangerous to operate.

If this is the case, call the police immediately so that you and your vehicle can be moved to a safe location. Police will need to direct traffic away from your lane to ensure further accidents don?t occur. If your car is functional and not a danger to operate, move your car to a safe location such as a parking lot or on the shoulder. This will help reduce the risk that another negligent driver causes you additional harm.

An injured party must try and gather all evidence possible to help strengthen their claim against the at-fault driver and their insurance company. Of course, if emergency medical treatment is necessary after a crash, this may be difficult. But, if a family member or friend can help assist in the gathering of evidence, it would be highly encouraged.

What information should be gathered? Other than the obvious gathering of the at-fault driver?s personal and insurance information, photos of all vehicles involved help establish the level of intensity of the impact. Often times, attorneys we fight that represent the at-fault driver and their insurance company will cherry pick which photos they want to present to a jury after the insurance company has sent their team of investigators. As you can imagine, these photos are not helpful for the injured client. They can be grainy or blurry, taken too close or too far away, or can even be in simple black and white, which can hide many of the scratches and dents.

Take photos of the road conditions. Take photos (or even audio/video recordings) of the at-fault driver. It?s baffling how many times my clients will be told ?sorry? or ?it?s my fault? by the negligent driver, but after the insurance company and the hired attorneys get involved, their story changes. A recording of the driver admitting fault can close many of the doors the insurance attorneys try to open.

Car accidents vary, from minor bumps where no visible property damage occurs at all, to others that result in cars looking like a crinkled Coke can. Regardless of the intensity of the collision, an insurance company won?t write a check without being shown that injuries occurred.

The best thing you can do to prove that injuries resulted from the crash is to seek medical attention immediately following the collision. Our office uses medical bills (the ?sword?) and medical records (the ?shield?) when fighting insurance companies for top dollar amounts.

The medical bill ?sword? slices through any of the insurance company?s arguments in which they claim damages did not occur. ?Damages? is a legal term describing changes in the financial situation of the injured party. In Georgia, damages is an essential element when pursuing any personal injury action. ?Oh yes, damages do exist, and here?s the bills and lost wages documentation to prove it!?

However, damages isn?t the only element ? we must still prove that the damages accrued were actually caused by the negligence of the at-fault driver. We are able to protect the claim?s integrity using the ?shield? of medical records. Medical providers who treat injured patients will document that the injuries being treated were caused by the vehicle collision, and not from any other action that could have caused the pain.

Here are the rules of consistent treatment: A) If you have a doctor?s appointment, go to it. B) If you feel 100% better, don?t continue to unnecessarily treat. C) If you?re in pain, seek medical attention. D) If you?re undergoing treatment and are feeling worse as time and goes on, pause the medical treatment and call your attorney doctor ? your treatment may need to be augmented.

Our office doesn?t take every case we get to a jury, but we certainly aren?t afraid to do so when the insurance company is pushing our clients around. However, it is important to monitor every case from its inception as if the case would be presented to a jury. With that said, it would be dangerous and probably futile to take a case to trial when the injured party has broken any of the above rules.

For instance, it would be nearly impossible to convince a jury to award medical billing damages to an injured party who told their doctor they feel great after two weeks of treatment, but continued to treat for another month because it felt good. The defendant-at-fault-driver isn?t liable for you to seek treatment because it feels good ? they?re liable for treatment that gets you back to the position you were in just before the crash occurred.

Injury adjusters will begin calling you the moment they learn you?ve been injured. Don?t fall into their traps. Remember ? the adjuster?s priority is to pay out as little as possible, and when they know that they have to pay out a large check, they?ll hold on to those funds for as long as possible in order to gather interest for the insurance company?s shareholders.

I?ve had so many clients come looking for help after they?ve allowed the insurance company to take a telephonic ?recorded statement,? wherein the insurance company ask the injured party a series of questions specifically designed to corner the person and not let them escape. The questions can be misleading, confusing, or vague. For instance, one former client was asked this:

?So, Mr. _____, you got out of the car after the accident and looked at the property damage to your vehicle before you called the ambulance. It?s safe to say you weren?t in any pain at that time, were you??

This question inherently causes the person to answer ?no? in hopes that they don?t sound like a liar or a claim-fabricator. However, it has been well established that moments after a crash, injured parties are often rushed full of adrenaline and do not feel the onset of back, neck, shoulder, knee, or other pain due to their heavy adrenal gland response.

Then, once we get to trial, that party who answered ?no? to the sneaky adjuster?s question cannot change his story to say, ?I was in pain, but didn?t know it because I was in shock.? Even though this is the absolute truth, the insurance company?s attorney will call the injured person?s credibility into question. Don?t talk to them about your injuries. Period.

If you are injured in a car accident in Georgia, you need an advocate you can trust. Don?t hesitate to contact our firm to schedule a free consultation!

Put Us On Your Side

Signs You Had a Brain Injury in a Car Wreck
Scroll to top
How Can We Help?